Dear Lord, to improve the server configuration and your gameplay experience, we’re going to merge some servers at 2022/10/23 23：55（GMT+8）. The merges are estimated to take about 8 hours and may end earlier or later, depending on the actual situation. During this period, players are not allowed to enter the game. The merges will be extended if they’re not completed on time. We are sorry for the inconvenience it may cause.

During the merge maintenance, the login and top-up access to the following servers will be temporarily closed.

1. Please link your game account to a third-party account as soon as possible to avoid unnecessary losses.

2. The login access of the original servers will be maintained after the merges.

Gameplay Rules after the Merges

1. Players' accounts will stay the same and all characters will be kept intact.

2. If two or more legions have the same name, the one with the highest legion ranking will retain the original name, while the other legions will be distinguished by additional numbers, such as 01, 02, etc., after their names. All the renamed legions will get 2000 Ingot as their rename fund.

The server’s total players who purchase Growth Fund are an accumulation of the merged servers.

The cities occupied before the merges will be cleared. All the legions need to declare war and occupy the cities again.

Arena: Arena Rankings will be reset and players will be re-listed according to the server numbers and rankings.

The rankings after the merges of S1 and S2 are as follow:

• The records will be cleared and regenerated by the players who first clear the stages after the merges.

• The sign-in progress will be retained.

• The sign-in rewards will not change for this month. From the next month, the rewards of the servers merged into the same group will be consistent.

To ensure that the server merges go smooth and the events of the merged servers are normal, the events supposed to be launched within 3 days before and 2 days after the server merges will be suspended, while the ongoing events will continue as normal. Suspended Events:

After the merges are completed, the above events will be launched on a normal cycle. You're probably going to have some questions about the merges. Here’s the Q&A for your reference.

2. Double Drop. During the merge event, players can obtain double drops from Main Quest Instances and Elite Instances and double fame from Arena.

3. Legion Activeness. Participate in the following legion events to get Ingot*288, Lucky Pack*3: Legion Boss at 12:00, Legion Boss at 19:10, Legion Trial, and Legion Quiz. If you have any problems or suggestions, please report them to customer service. Thank you!

How do i find my ID 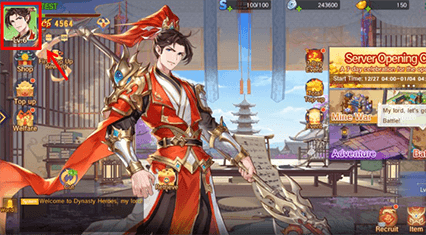 2.Tap to copy your ID 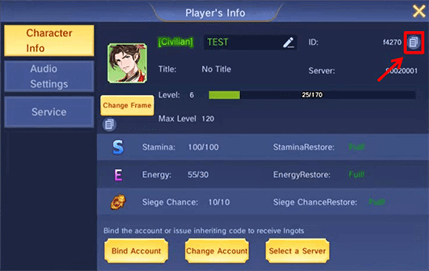